I have quite a few rechargable AA and AAA batteries kicking around that I’d like to use in various projects, but I am very aware that some of them are a little weak for lack of exercise. Rather than identify the batteries by having my slope soaring glider fall out of the sky when the battery pack voltage gets too low, I’d like to know what batteries need some TLC before-hand. A device that conducts a controlled discharge of the battery cells and logs the voltages seemed like a good way of doing this. One of my friends is also obtaining old dumped laptop battery packs and recovering the cells from them to build large “Power walls” for his solar electricity system and battery packs for powering an electric go-kart. So this system, with a little modification, will be useful for him to test the health of the cells he recovers. To test pairs of recovered 3.7V 18650 Lithium Ion batteries (3100mAh) the circuit would need to be modified a little by introducing a voltage divider to keep the voltage at the Arduino pins less than 5V and adjust the discharge resistors to suit the capacity.

The battery discharge tester is quite simple. All it does is discharge a battery across a load resistor that has been sized to discharge a battery at its rated capacity over the course of five hours. An Arduino monitors the voltage at the battery terminal and records this to a file on an SD Card. When the battery discharges to a threshold level where it is considered to be “empty” without causing damage to the battery from over discharging it, then the Arduino opens a relay and stops the battery from discharging further. The Arduino then writes an artificial zero reading to the file to mark the end of the test for that particular cell. There is a button to stop the test for all cells, and buttons to allow the user to replace a discharged cell, and start a new discharge test on another cell installed in that test station. If all cells have finished, then the Arduino will ensure all relays are open and the file is closed. The CSV file with the record of times and voltages for each battery test station, can then be analysed in a spreadsheet to calculate the currents, the actual energy discharged, and plot the voltage profiles. Weak and damaged cells will generally show up by having short discharge times.

Below is a snippet of the output file content, and a plot of the traces. 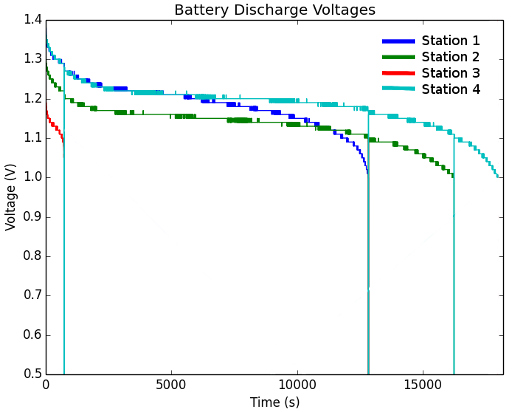 Station 1, which contained a NiCd battery, automatically disconnected the load after the test had been running for about 3.5hours. Station 3 had a particularly sick NiMh battery that was known to be shoddy and disconnected very early. The other two NiMh batteries continued to discharge and then be disconnected from the load over the course of the following few hours. All batteries used in this test had been charged prior to the test.

You will notice in the plot there are some vertical drops in the curves whenever one of the batteries has completed its discharge test and been switched out. This is just an artifact from the arrangement of my code which creates a blank line whenever a battery switches out. Because it does not interfere with the operation of the device or the analysis I consider it fit for purpose, and have not bothered to fix this up.

The python script to create the plot from a .CSV file can be found here: BattDisPlotv1.py. This requires the Numpy library and the Matplotlib library, both of which can be found in Pyzo.

The system described here has been designed to test four single AA or AAA NiMh and NiCd cells simultaneously. There are three load resistors on each testing station which are selected using a jumper to suit the battery type and capacity.

The highest battery voltage it can measure is 5V. So a single cell LiPo battery would be okay, but a 2 cell LiPo battery pack would not. In order to use this for high voltage multicell battery packs you will need to install an appropriate voltage divider, modify the code to suit, and modify the resistors to discharge the battery in five hours. For larger capacity cells, you will need to modify the resistors for a different discharge rate.

The SD Card module used is the same as used in the Simple Pressure and Temperature logger project. You can find them at www.dx.com (SKU-205308). It works with the standard SD library that comes with the Arduino IDE, and uses the SPI connections on pins D11 through to D13 (as they are on the Arduino Nano) with the Chip Select assigned to D10.

Relays are used to control the battery discharge because they have a very low resistance connection and so will not interfere with the discharge test. They are connected with the switch in the Normally Open position to disconnect the batteries if the system fails.

This device tests four batteries simultaneously and pretty much uses all of the available pins on an Arduino Nano. To test more batteries, an Arduino Mega would be required.

Like the Simple Pressure and Temperature logger project the timestamp used is just the number of seconds since the sketch started running. I did not see much point in adding extra complexity through having a real time clock providing exact time of day and dates.

While the code includes serial communication, this is only for initial testing and debugging. The system is designed to run in a stand-alone mode from a 5V power supply and does not require a computer to be connected.

Here is the circuit diagram for a 5V supply and using 5V relays.

Below is a variation of the design that uses a 12V supply and 12V relays.

It took me a while to solder up because it was a bit tedious.

The only library used is for the SD card module. This library is included in the standard Arduino IDE, and so you will not need to hunt around for any extra stuff in order to make this work. You can download the sketch from here: Batt_Dischargerv4.ino.

This code was developed on the Arduino IDE 1.6.8 which has a number of updated libraries in it. After battling with converting float values to strings so they may be written to the SD Card as was done with the Simple Pressure and Temperature logger project, I found that it was possible to write the float values directly to the SD Card with a print statement. So much easier! I owe a vote of thanks to the person who updated the SD library to included this functionality, and to Adafruit’s Bill Earl and Lady Ada for highlighting the ability to do this on their Data Logger Shield project walkthrough.

The Battery Discharge Tester project described above is provided by Hamish Trolove under a creative commons license.